This Project was one of our first sole food forest design and implementation. The client who had studied permaculture in the tropics, but was unfamiliar with temperate plants, simply wanted a food forest with swales. The site consisted largely of a Northwest facing slope, and a semi shaded  pathway and paved area.  The slope has been planted with a few fruit trees, mulched with woodchips and the rear fence line planted with Lily Pily to eventually replace the current pine hedge. The top soil was clay/loam with an average ph of 7 and depth of 20—25cm, below which is a clay subsoil. 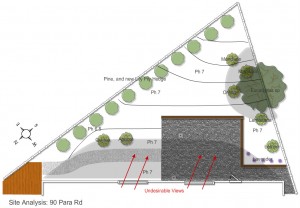 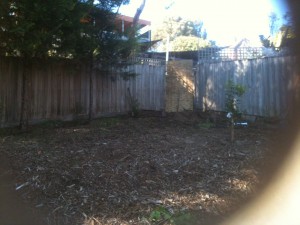 The design that was developed natural contours of the slope to harvest rainwater and sink it into the landscape which consists of a polycultural food forest containig the following layers and species.

1- Canopy tree, the large over story These can be a nitrogen fixing deep rooted nurse tree ,providing mid summer shade. Preferably loosing its leaves during winter or chop and dropped at this time. Species included in this design are:  Albizia julibrissin(L), and Acacia floribunda(L). Larger fruit tees are usually included in this layer however only dwarf trees were selected for this design

6 – Ground Covers These protect the mulch and soil from drying out too much and certain species can fix nitrogen. Sweet potato, Pumpkin, Zucchini, Okinawa spinach, Nasturtium, Strawberry, Warrigal greens. Chamomile.

8 – Fungal Layer  (not shown in image) This is the network that connects the trees. It may not be an edible layer but a layer very important to the system. The existing use of woodchips as  mulch has encouraged growth of this layer and should be continued.

Three hand dug ‘mini swales’ were incorporated into the design to passively harvest water and will double as access paths in all times but during and after rain. The planting layout will however ensure the forest is easily accessible at all times. This plan displays the path of water harvested by the swale system and its overflow points.  Excess water will be spilt from the swale system via a pvc pipe installed in the lower swale and leading to the hard surface which is graded towards a drain.  This overflow pipe will be able to be switched on and off by simple swiveling  right angle join, allowing water to spill into the garden below via the secondary level cill spillway of the lowest swale. 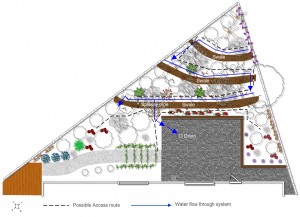 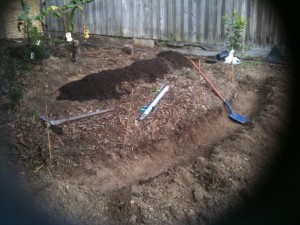 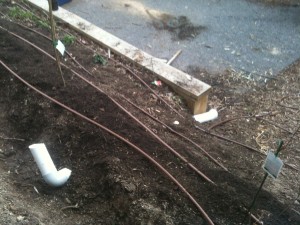 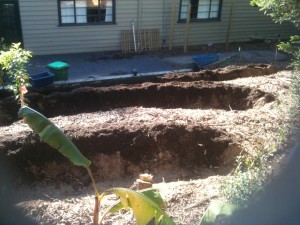 Swales were composted, drip irrigation installed and some of the plants planted. The rest were subsequently planted by the client. 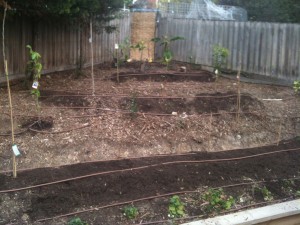 Upon my return to the site 3 months later I was pleasantly surprised to be confronted by a sea of lush green growth. 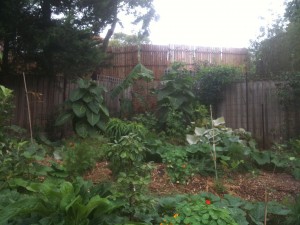 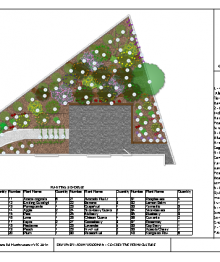 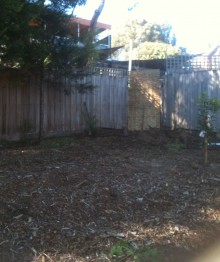 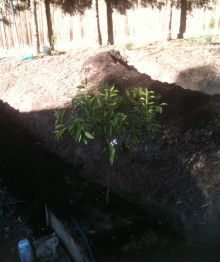 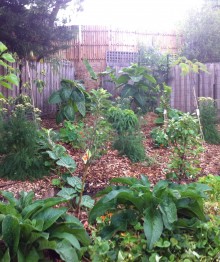 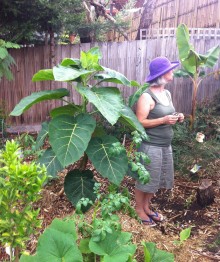 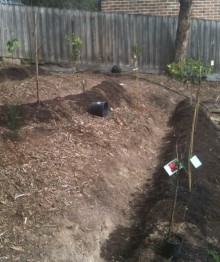 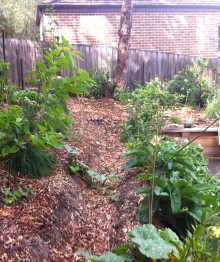 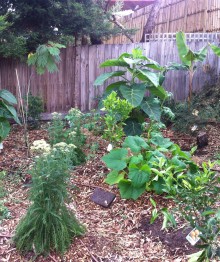 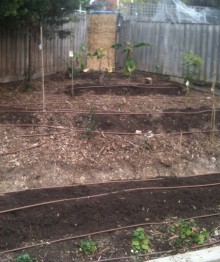 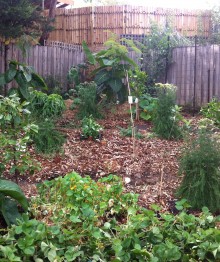 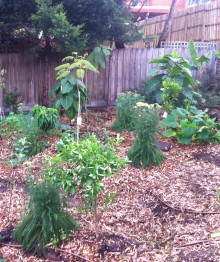